My hometown of Chicago, with regard to Blues Guitar, is the land of the giants. …

My hometown of Chicago, with regard to Blues Guitar, is the land of the giants. …

My hometown of Chicago, with regard to Blues Guitar, is the land of the giants. Otis Rush was a giant even amongst giants. Meeting him for the first time, for me, was like meeting a superhero!

I probably saw him perform two hundred times over the years and was always inspired and always learned something. I've seen Otis Rush do things on the guitar a few times that I didn't even know could be done!

I never got to work with him formally although I always wanted to but I was just too intimidated to pursue the gig. Whenever he was looking for a rhythm guitarist I always seemed to be in the right places but just at the wrong times to get that gig. I was blessed however to have been on stage with him a few times.

Over the years I got to know him fairly well and would often go backstage to greet him when he was in town. He was always very gracious, supportive, and encouraging. I never got to thank him personally but his small acts of kindness had a far greater impact on shaping me as a player than I could ever have put into words.

My condolences to the Rush family and his wife Masaki. Rest in peace Otis Rush. The great band in the sky just got a whole lot better! 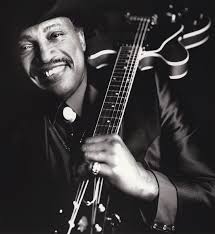