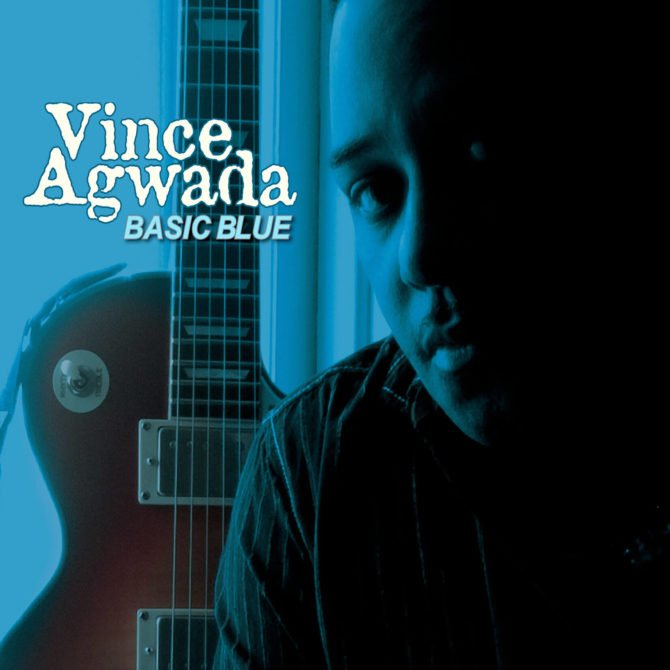 Vince Agwada got his musical education in the blues clubs of Chicago, often hanging out at Theresa’s or Buddy Guy’s Checkerboard Lounge. Agwada took advantage of opportunities to jam with the likes of Junior Wells, Buddy Guy, Otis Rush, Syl Johnson and Left Dizz, among others. From the early 1980’s on, Agwada has toured the US with the likes of Buddy Guy, Koko Taylor, Junior Wells, Sugar Blue, The Dells and Bernie Mac, as well as with his own bands, One Eyed Jax and the Vince Agwada Band. Agwada recently released Basic Blue, the follow-up to his 2008 solo debut, Eyes Of The City. Agwada sticks with his blues roots, but spends more time fleshing out the ground that lies between the blues and its wayward child, rock n roll.

Basic Blue opens with “Chi-Town State Of Mind”, a heavy, fuzzy blues-rocker that’s as gritty as the city it proclaims love for. Both guitar and harmonica produce distinctive growling sounds here in a dynamic and energetic opener that sets the bar high. “Blindsided” is a darker, grungier brand of blues with a heavy feel. It’s a fun tune about getting trapped in something you want anyway; very entertaining. “President” is a funk-laden blues number with some wicked guitar work from Agwada, who shreds his way through the song with an almost manic glee. Agwada slows things down with the low-key classic rock-style power ballad “Big City Blues”; a solid album track that serves as notice that almost anything goes here.

“Black Rain” is a down tempo number that’s excessively dark and features some of the best guitar work on the album. It’s balanced off by the party blues/rock of “Shake It Up”. Just try to sit still; I dare you. “Sirius Biz” gets a bit more experimental, with an extended jam featuring some Tower Of Power style horn work over the top. This is catchy, funky and danceable all at once. “Right On” is solid with some intriguing harmonica work, but the ham-handed voiceover kills the mood. Agwada returns to the hard-driving blues/rock blend he opened with on “Train”, before closing with the mellow ruminations of “She Never Said…” Blues rears its head occasionally, but much of the song is atmospheric in sound; lyric in melody.

Vince Agwada takes several strides forward on Basic Blue, with a sound evolving along the fault line that separates rock n roll, modern R&B and the blues. Basic Blue shows a successful artist, confident in his abilities, who continues to stretch the bounds of his muse. In general, that effort is exemplary on Basic Blue. Agwada shows a distinctive blend of technical skill, resourcefulness and pure drive that sets Basic Blue apart from the harried pack of blue rock bands out there. Basic Blue is definitely worth spending some time with.